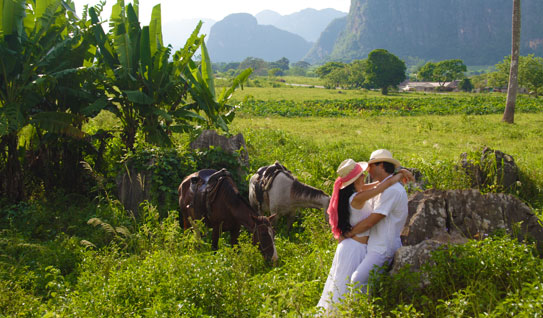 Pinar del Río is the most western province of Cuba and the land of the best cigar in the world. Here Cuba ends or begins, depending on the way you look at the island. On the north it limits with the Golf of Mexico, on the east with La Habana province, on the west with the Yucatán straight, and on the south with the Golf of Batabanó and the Caribbean Sea. It is said that the name Pinar del Río was given due to geographic reasons, because the nucleus of the city is bordering the Guamá River, surrounded by vast pine forests.

The city of Pinar del Río is characterized by its houses with porches and columns, with such a variety of styles that surprise the visitors, their manifest eagerness to break the monotony gives way to a collection of clashing colors.

Because of its landscapes, this province is one of the most picturesque of the country; it has several tourist resorts which have international reputation; such as, Soroa and Viñales. Soroa appears surrounded by green mountains and prodigious vegetation, among which the majestic orchid stands out, the flower that represents the area.

Viñales is located in the heart of the Sierra de los Órganos, the oldest of the country. Here the view is dominated by carsic elevations that form abrupt and typical mogotes only found in this region, rich in caves, many of which have rivers and underwater streams, la Cueva del Indio is one of the most visited ones. But the major attractions in the valley are the cone-shaped raised mogotes – which are a type of butte – with their exceptional landscapes. The mogotes are inhabited by several plant species such as palm trees and the endemic species of ceibón (Bombax emarginatum), the caiman oak, the palmita de sierra and the cork palm. Nowadays this last is considered a fossil. These limestone mogotes look like castle ruins with their inaccessible walls that are almost vertical and round-topped. The hard, dark limestone formations in this area are among the oldest geological formations in Cuba. In the southern zone rise slate round-topped hills. It is here that one of the most notable karst terrains in the world exists, with underground rivers hidden in caverns. The valley system includes the San Vicente Valley, Luis Lazo Valley, Guasasa Valley, Ruiseñor Valley, Mal Paso Valley, Ancón Valley, and the Hoyo Caliente or Hot Hole (for want of a better term). All of them are very accessible to visitors. Other important mogotes are the Cerros de Guane, Punta de la Sierra, Sumidero, Resolladero, Quemado, Celador, El Infierno (The Hell), Galeras, Ancón, Jagua Vieja and San Andrés.

In Sierra del Rosario is another landscape of incalculable beauty, which attracts those who love Nature and distraction. By the end of the sicties the Revolutionary Goverment decided to reforest the area and build a town for the peasants that lived in the hills, dispersed and under poverty consditions. The forests were indeed repopulated, and highways, bridges and the houses of the rural comunity were built as part of a wonderful cultural project. More than 1.200 kilometers of terraces were traced to stop the erosion. In the last years the La Moka Hotel was erected without damaging the enviroment, following the principle of cohabiting with Nature. The ruins of more than 55 coffee plantations with its facilities, included the slaves bunkhouses. This a museum that shows the customs and culture of the French people that lived there. The famous San Juan River, with its small waterfall and its medicinal waters is another place to visit. Las Terrazas is located 60 km far from Havana.

Guanahacabibes: the biggest forest reservation in the country, is also located here. Huge forests with abundant plants and animals that do not exist in other places of the island, lazy iguanas being almost two meters long, wild pigs with fangs like razors, nervous deer and many other species can be found here. In this remote area of Pinar del Río province in the west of Cuba is located María la Gorda, nature preserve. There is a diving center by the same name. One of the most visited in Cuba, its ocean floors are well protected, leaving stunning coral reefs and challenging walls. Full of captivating grottoes, tunnels and vertical caves, the center has at least 50 high level diving sites, 35 official and the rest still unbaptized, all less than an hour’s boat ride away and some only five minutes away.

Cayo Levisa, with beautiful pine forests and wild bushes, is found among the cays located in the northern part of the province. The beach extends for 3.5 kilometers, and is characterized by the existence of an extensive coral reef, with many different kinds of corals such as sweetheart’s bouquet, deer’s horn, big eared coral, white corals and the famous black coral. The coastal zone is covered with mangroves where many tropical birds live. Some of the species that can be found in the clear waters here are the red snapper, lobsters and the nail fish .

Along the beach can be found the comfortable Villa Levisa just a 15 minute boat ride from Palma Rubia in the northwest of Cuba. This area is very popular with divers and amateurs of other nautical activities such as water skiing, wind surfing, sea-kayaking and catamaran sailing.

The main economic activity of the area is the cultivation of the three varieties of tobacco: mild, black and burley. The intense green of the wide and long tobacco leave matches the view, in contrast with the wide spectrum of greens that the irregular geography of Pinar del Río presents. The most important tobacco areas are located in the regions of Consolación del Sur, San Juan y Martínez, Pinar del Río, San Luis, Guane and Sandino, being living exponents of these beautiful contrasts. But among so much green verdor, the typical “casas de tabaco” (tobacco houses) stand out, built with guano (dry leave of the palm tree), where the tobacco leave is placed in order to be dried, giving way to the beginning of the long process which will produce aromatic cigarettes or the insuperable Habanos cigars.

Pinar del Río also has a rehabilitation center, San Diego de los Baños, with solarium steam baths, sulfurous baths and a Physiotherapy department. The visitors may enjoy the benefits of its three mine-medicinal streams:
– El Templado (the moderate one): with baths temperature of 34-Celsius grades. It is used mainly for rheumatic diseases.
– El Tigre (the Tiger): its average temperature is about 31-Celsius grades. Due to its privacy, this one is used for skin diseases.
– La Gallina (the Hen): with 36-Celsius grades, for younger sick persons having the same arthritis diseases.

In the different hotel installations of the region, you may enjoy a nice offer, la Guayabita del Pinar, an exquisite liqueur of this region. In its elaboration, a small and aromatic wild fruit which grows in sandy savannahs and pine trees of this territory, having the same name (Guayabita), is used. Nowadays, two types are produced: the dry guayabita (brandy) and the guayabita liqueur (sweet), which may be acquired not only in Pinar del Río, but practically in all the regions of Cuba.