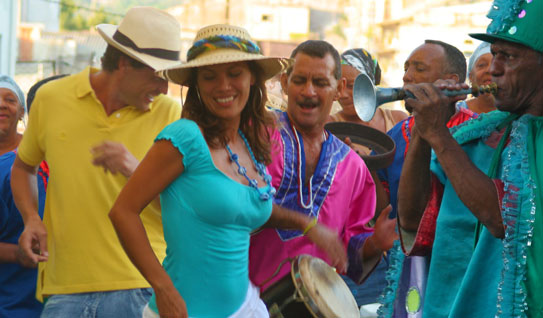 Spanish Governor Diego Velázquez founded the settlement on July 25, 1515. The province is 2382 square miles (610 square kilometers) in size and is bounded by the sea and the Sierra Maestra Mountains, with include Turquino Park, the highest point (6476 feet, or 1974 meters, above sea level) in Cuba. The international airport is only 15 minutes by car from the center of the city.

Santiago, Cuba’s second city, has an eclectic range of architectural styles from colonial to art deco. The city center is cluttered, featuring many beautiful pastel-colored buildings in better condition than many of those in the capital.

During the 17th century Santiago was besieged by pirates from France and England, leading to the construction of the Castillo del Morro, still intact and now housing the piracy museum. Because of its location, Santiago has been the scene of many migratory exchanges with other countries; it was the first city in Cuba to receive African slaves, many French fled here from the slaves’ insurrection in Haiti in the 18th century and Jamaicans have also migrated here from the neighboring island. It is known as the ‘heroic city’ (Ciudad Héroe) or ‘capital moral de la Revolución Cubana. A spot near its center still preserves its colonial houses and narrow streets. Padre Rico street is outstanding for its steep steps. Here you will also find the famous and visited Heredia street, named after the Cuban poet of the 19th century, ending at Céspedes park. This park is located at the center of the city and is surrounded by important buildings as the Cathedral, the Museo de Ambiente Histórico Cubano (Museum of the Cuban Historical Ambience), the Palacio de Gobierno (Government Palace) and the house where Diego Velázquez once lived. Others interest places are Museo 26 de Julio (Museum of July 26), Museo de la Lucha Clandestina, Museum Emilio Bacardí and much more.

The most popular pilgrimage site in Cuba is the Santuario Nacional a Nuestra Señora de la Caridad del Cobre (El Cobre Sanctuary). The site is housed in a church with dual bell towers that stands alone on a top a hill about 15 kilometers northwest of Santiago. Its arrival to the island is part of a legend that started at the beginnings of the XVII century and has changed with time. Three humble men of the town, belonging to the three ethnics or cultures that forged the Cuban people (White, black, and mulatto), found the image of the virgin floating in the waters of the Nipe Bay in Santiago. They took her to mines of El Cobre (The Cooper) where they built a hermitage for her. Every year beautiful ¨cult and faith¨ ceremonies take place to honor his religious symbol so popular in Cuba The Basílica de la Caridad del Cobre , apart from its constructive beauty, is famous for the great number of personal objects and treasures that have been devoted to the Virgin. Among them, there is the gold medal that Ernest Hemingway won as Nobel Prize of Literature.

Some sights East of Santiago include the Granjita Siboney, Valle de la Prehistoria, and the Acuario de Baconao. The first of these, Granjita Siboney, is a famous revolutionary hideout as the other two are sure to be hit with the kids. Baconao Park is an impressing tourist group provided by several facilities and natural places. Located in the Sierra Maestra, Baconao has spectacular places, beautiful beaches like Cazonal, Daiquirí, Siboney, Jaraguá, Verraco, Sigua and Baconao. It was declared by UNESCO Natural Reserve of the Biosphere. Here, there is a Valley of the Prehistoria, consisting on reproductions of prehistoric animals made of stone in almost their natural size that are disseminated on a wide valley surrounded by mountains, in the same places where the legendary animals should have lived.

The smallest park in the mountain range of the Sierra Maestra owes its name (the Big Rock) to the presence of several stone blocks of which the biggest is 51 meters long by 25 meters high, which favor the temperate climate with its high humidity. Fauna includes various endemic species of birds. Climbing La Gran Piedra and horseback are favored activities here. From the highest point of the park it is possible to watch the clouds drift among the mountains in a beautiful contrast of green and blue.

In Cuba, when you speak of hospitafity, the peaple of Santiago de Cuba always come to to mind. Being from Santiago de Cuba means being attentive and joyous. Music bursts forth in the city`s streets, and averybody invents pretexts for celebrating. Solidarity and joy are deeply rooted in the hearts of those who live in this Caribbean city.

Hotel San Juan:** Located in the most heavily forested area of the historic city of Santiago de Cuba in western Cuba. Consists of pleasant cottages surrounded by gardens and a rugged landscape, which lends it a uniquely attractive and romantic appearance. The hotel has 110 air-conditioned rooms with satellite TV, telephone, radio, and safe deposit box. Fifteen rooms also come with a minibar. Facilities include two restaurants, cafeteria, snack bar, bars in the lobby and on the terrace, swimming pool for children and adults, nightclub, medical service, boutique, 24-hours-a-day currency exchange service, room service, taxis, tourism office, massage service, and car rental. The hotels can also cater for weddings as well as other social activities.

Bucanero Hotel:*** Operates on the “all inclusive” plan. This hotel has 200 air-conditioned rooms with private bathroom, satellite TV, telephone, radio, and minibar. The rooms have a terrace or balcony overlooking the mountains or the sea. There is a buffet restaurant and national alcoholic beverages to enjoy. Non-motorized water sports can be practiced. A daily program of hosted entertainment and nighttime activities is offered.