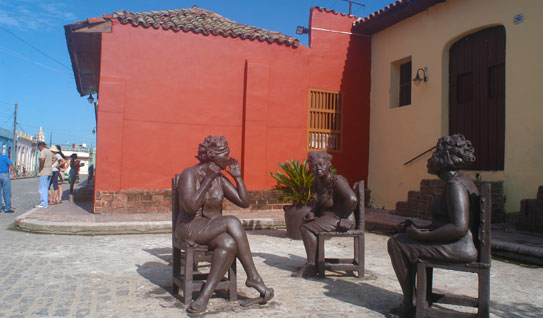 The city of Camagüey was one of the seven first villas founded by Diego Velázquez at the end of the month of June or beginning of July of 1515. This city was given the name of San María de Puerto Príncipe, in the place where the city of Nuevitas is located.

The urban scheme of the city is characterized by the sinuous design and intricate trace of its irregular and stone-paved streets, and by a considerable quantity of plazas (squares) and plazuelas (smaller squares) that remind us of medieval cities that seem to have been built in this way in order to be defended from the pirates attacks. Among its plazas, Plaza de Armas, del Carmen and  San Juan de Dios, can be pointed out.

El tinajón (large earthenware jar), used under the spurt of the canals that collected the rainwater from the roofs, became an indispensable element in each Camagüeyano patio. These huge tinajas de agua (water holders) were used in order to keep water which was very scarce in the region, and due to them Camagüey is known as “la ciudad de los tinajones”.
Nowadays, los tinajones are a component of the personality of the city.

The city keeps a certain number of religious buildings, many of them centered in the historical area of the city, which due to its importance was declared National Monument in 1978. Among the religious buildings, the oldest is la Soledad Church and la Merced Church. Besides them, other important constructions of the city can also be added: Ignacio Agramonte´s birthplace, the History Museum, the Students Movement Museum, the Principal Museum, among others.

Within the history of the province, there are data of great interest. From a cultural point of view, Camagüey has the privilege of having the first literary piece of work written in Cuba known up to the present moment, as well as outstanding figures in the different spheres of art, culture, and science.

In the north coast of Camagüey there is one of the largest beaches of Cuba, Santa Lucía, is 23 km long. It forms a kind of lengüeta (tongue) of white and fine sand going from east to west and separated from the mainland by an extense forest and a lagoon inhabited by thousands of pink flamingos. The beach is continuous and open, without rocks or steep banks, but it is protected by an extense coral reef near the beach that offers exceptional spots for scuba diving practice. In this coral reef, there are abundant corals, gorgonians having big size, sponges of varied colors and mogotes separated by deep cracks, valleys, tunnels, abrupt walls with a variety of fish and other attractions.

Another natural wonder of Camagüey is Sabinal Cay, one of the most beautiful of the area. It is 335 km long, it has approximately 26 km of good beach, known by the name of Los Pinos (The Pines). The vegetation in this cay is medium and very varied, and its fauna is rich in species, such as, deer, jutías (rodents from the West Indies), flamingos, cattle and a wide variety of birds.

This cay may be visited by tourists from Santa Lucía Beach, in excursions that combine yachting, scuba diving and fishing, together with the enjoy of the beach; always keeping in mind that, in general, this cay is virgen, with an exotic nature, in a natural reservation area and of conservation of species.