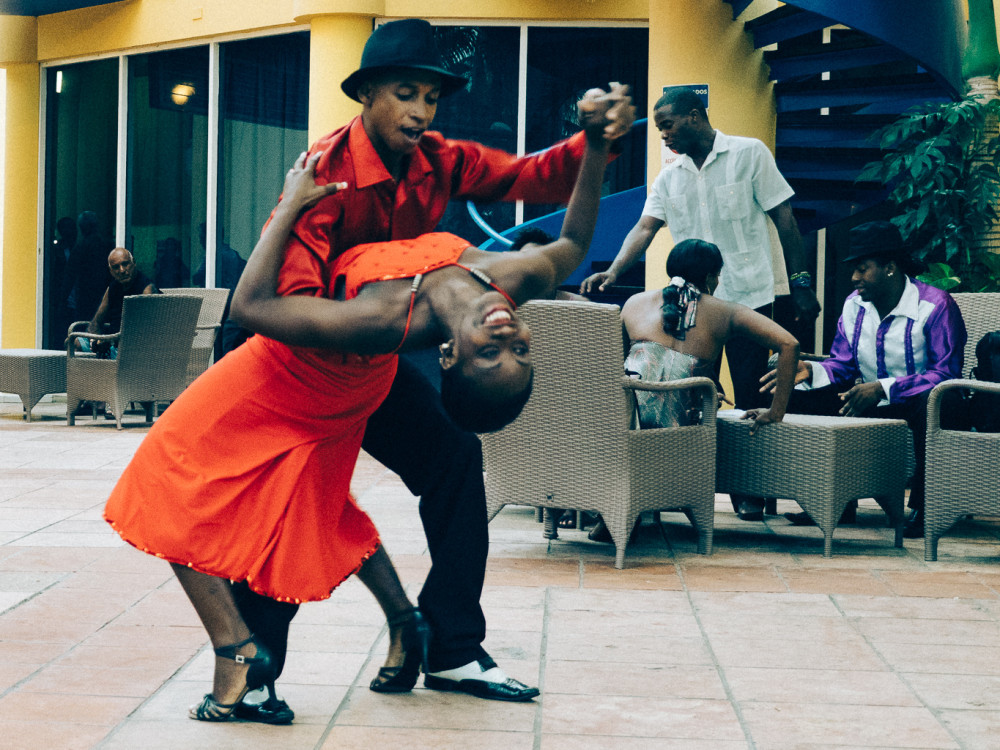 Havana nights are so exciting and particulary sensual, you have to see it to believe it!

Cuba is known as the Island of music, because music means oxygen and life for Cubans. The daily existence of this Island breathes and lapses to the compass of an amalgam of rhythms listened in any corner, through a window or in any street. Don’t you feel surprised if, in your travels along the country, you find a sweaty couple dancing to the compass of a street rumba. Prepare your eyes, senses and disposition.

For sure, you will be invited to this spontaneous party. You won’t find only one, but a lot of parties. Through this nation’s veins circulate music constantly. Music is present in the way of speaking, walking, in the romance of a first encounter or even in more difficult and complex situations of everyday life.

Music, above all the artistic manifestations, was the one that evolved the most, with bigger rapidness ad strength. Its progress has influenced even the birth of musical rhythms in other countries. For instance, The Habanera, a gender resulting from the Creoles Danza y contradanza, influenced the birth of the famous Tango.
Another example is the Cuban Son: its rhythm was adopted by the modern Latin Salsa players.

The Cuban music is an eternal debtor of the Spanish folklore and the vigor of the African rhythm brought to the country by the black slaves. It also receives, in a smaller quantity, the French legacy of the Gallic landowners and the slaves that arrived to the Eastern region of the country escaping from the insurrection in Haiti. “All mixed”, as Nicolás Guillén, National Poet, wrote. All these sounds mixtures conformed, along the years, a vast range of melodies and rhythms that today are part of the Cuban identity.

Cuban Musical Genders
The son is the predominant rhythm of the Cuban music, and the one which are derived musical genders such as the Danzón, the Guaracha, the Guaguancó, Rumba, Cha cha cha, Mambo and Salsa or its national version called the Cuban Timba.

The so-called refined, symphonic or camera music, have had magnificent interpreters and grateful composers known worldwide. It is spoken of a Cuban school of guitar or about its outstanding piano players.

Jazz and Latin Jazz has also many great followers in the Island.

The Cuban musicians stand out also for their talent for percussion. They are considered fast and rhythmic.

The Güajira
Although it is popular in different countries around the world, and not only in Latin America and in Castilian language, the Güajira has its biggest strength in Cuba. It has a strong Spanish influence, although Italians, Portuguese and also Brazilians enjoy it vividly.

What is the Güajira? It is a mixture of many things, poetry in the first place, then tenth and music. In second place is always improvised, which means it is invented in the moment that two people prepare to sing it in front of the public (the more people the better atmosphere is achieved).

One of the singers says a tenth, and the other one should continue, using the previous verse.

The Güajira is usually controversial. It is a kind of a spoken and sung fight. To perform a good Güajira it is also necessary a little bit of acting. It is a show subordinated to the ways of the gender in the scene.

Which are the main topics? Love, friendship, philosophical problems, death, birth, animals, the sun, the moon, the water, palms, anything from moral and ethical matters to the simplest and nicest problems of everyday life. It is loaded with the Creole grace and usually full roguery, great humor, and bloom.

Buenavista Social Club
The History of the Buenavista Social Club still surprises the musical media.
Suddenly, a group of old musicians prepare their instruments and their very old voices and decided to enter the world scene. Nobody could imagine it. The nostalgia was the only remaining.

Ibrahim Ferrer, the Director of the orchestra was totally unknown by the new generation. The old Cuban musicians and the most cultured young people hardly remember him.

A North American producer rediscovered them. He saw their strength and a possibility in the saturated market of a certain music gender and the stridency of temporary rhythms. He not only saw their talent and grace but the possibility of promoting them in an inaccessible market for the musicians of the island.

But is not just the only Buenavista Social Club. The phenomenon includes the formidable 90-year-old musician, Compay Segundo, and more recently another very old one: Elíades Ochoa. Something happens, there is no doubts, but the Cuban music has to be revised up and down as well as the market where it doesn´t converge due to ignorance, despite the political blockade.

Somebody affirmed that the great soneros always came from Santiago de Cuba as well as the insatiable Cuban rum in parties along the island. Ibrahim Ferrer also arrived from Santiago de Cuba. He won a Grammy Awards in 1997, was nominated in 1999 with his memorable band, and won a Latin Grammy in the year 2000.

When the Buenavista Social Club enters the scenario, there is a whole history of the Cuban music of this century behind it. And it happens that Cubans are one. It doesn’t matter the époque, the rhythms, the spirituality, but the essences of that ajiaco of races, Spaniards, Africans, Latinos, Creoles, Asians, Europeans, and of many other countries.

The Bolero
There is no doubt: it is the musical rhythm that most identifies Latin Americans. It has a lot to do with bewitching. It is danced as part of the romantic atmosphere that wakes up inevitably among those that are seduced by its mystery. This is a rhythm to think, to remember, to twist the soul.

There are many definitions of the Bolero. Somebody has said that it is more than a sung rhythm or a musical gender; it is a state of the spirit, generally nostalgic and deeply intimate. Nobody conceives it if it is not associated to love. Mexicans and Cuban claimed to be its father; the truth is that the best Boleros have born in these two countries. Also, Venezuelans, Colombians, Dominicans, Puerto Rican and Central Americans, in general, have created great Boleros, and they even dare to claim its patrimony.

But the Bolero in America is defined as an infinite and insatiable musical rhythm. It transcendent time and it has listened particularly in bars, cabarets, and taverns. All the dictionaries recognize it as Cuban. It is a slight melodic gender, written in binary compass and slow tempo.

Maybe, the enjoyment of this gender has to do with time and past, because, with the passing of years, the Bolero admirers end up delighting it with enigmatic stupor.

It is sung loaded with sadness, guitar in hand with a strong dose of nostalgia. It has a lot to do with failures and old love conquests. For many, the Bolero is a synonym of impossible and futile love.

The classical music lovers always remember Maurice Ravel´s Bolero. But that piece doesn´t have anything to do with our Bolero.

Ours means the man, the simple man taking out all of his stories or enjoying his old, mysterious and unconcluded passages of love, the last time that will never return.