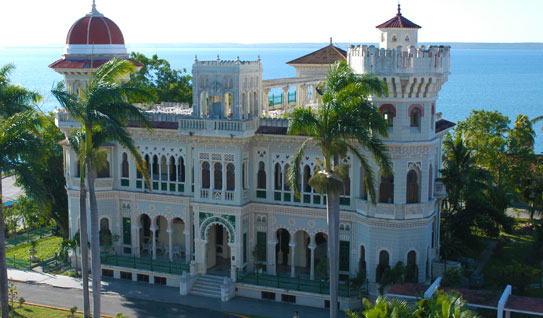 Located on the south-central region of the Island and with a unique tourism product, whose main elements are its enormous nautical potential and its rich historical and cultural traditions, the province of Cienfuegos is today a must-see place for most of the visitors who tour the country.
Without a doubt, its main attraction is the capital city itself, identically named and unique settlement founded by French settlers who came from Burdeos, Philadelphia and Louisiana. According to history, the colony of La Fernandina de Jagua owes its birth, on April 22 of 1819, to Don Louis D’Clouet; it became a Villa in 1829 and a City in 1880.

Cienfuegos is widely known as the Pearl of the South or the beautiful city of the sea; and even one its most illustrious children, the greatest sonero Benny Moré, used to proudly call it “the city that I like the most”.

In all cases, the nicknames are very loyal to the beauty of a city that was finally settled on the shores of the peaceful Bay of Jagua and which is very appealing to the visitors because of the perfect straightness of the streets and also for the impressive accumulation of historic cultural and architectural values that can be seen in its historic center, recently declared National Heritage.

Originally, the urban center continued its development according to with the colonial construction style, which used to ramify from the Plaza de Armas (Parade Square), currently known as José Martí square, around which the first 25 blocks were built, as well as the most important government, religious and domestic buildings.