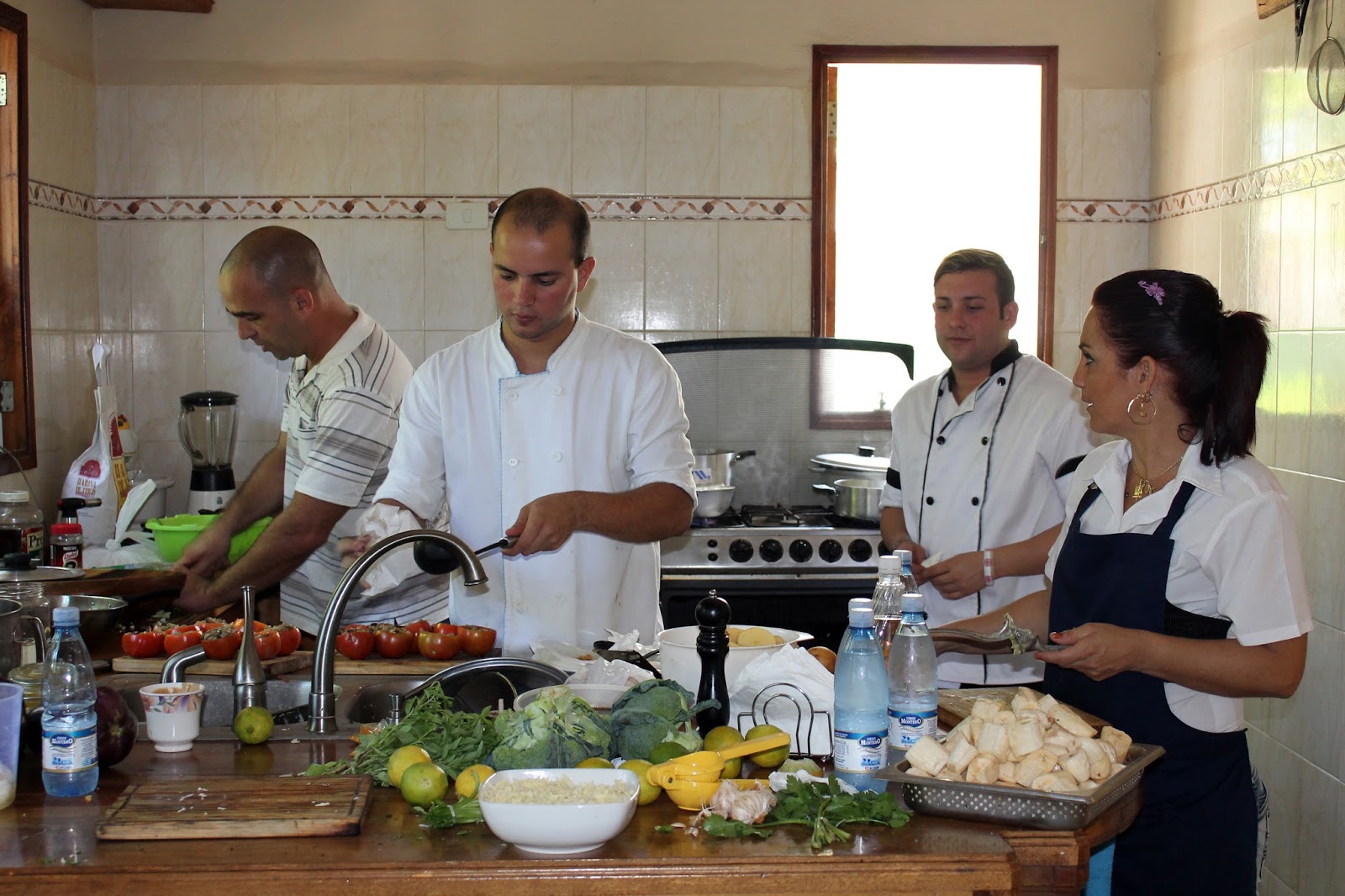 Cuban restaurants and Cuisine. The most Delicious Cuban Plates. Request a cuisine tour as one of our Cuba travel services.

This section is for those who love the food and like to taste every new flavor. Our Cuba Travel Services wants to focus on Cuban cuisine!

The Countess of Merlin, Cuban settled in Paris and very well known then for her social gatherings in the French Capital, wrote a book called ¨Travels to Havana¨ (1840). She told how her opulent Creole family put in their dining table the most select of the Spanish, French and English cuisine, although they preferred the Cuban diet.

They gave the visitors all the European luxury, but they habitually fed with the typical menu of the country. Instead of the Westphalia jam or the roast beef, they surrender to the ajiaco.

The ajiaco is the king of the Cuban cuisine with a typical presentation in the national kitchen. It’s a thick consommé, full of viands and vegetables, and with the greasy, fragrant and paradisiacal intervention of the pork meat. The ajiaco, mixture of ingredients, is symbol and synthesis of Cuba, its people, and its culture.

There is another plate, rice, and beans, that, although they are eaten together, they are cooked separately. The commensal mix them both, puts them together in a plate that can be eaten at the beginning or at the end of dinner even as the only plate. For Cubans, if there are not rice and beans, there is not complete dinner. When you cook them in the same pot, then you get a congrí, which can be served with boiled yucca, seasoned with lemon juice or sour orange and garlic and fried or roasted pork ribs. This plate symbolizes the Cuban Creole food.

The pork meat is considered a divine food in Cuba and it reaches all its magnitude grilled with carbon. The rice and black beans can be also combined with the beef, particularly the ground beef, and especially in its most popular way, which is the Havana ground beef. In this plate the beans are excluded. There is a song that talks about the Cuban cuisine and it says: ¨Rice with ground beef and yucca¨! Another combination is the rice with fried chicken. In this plate the yucca could be substituted with another viand: the sweet potato, fried or boiled, or the malanga and the parboiled pumpkins.

The banana, green or ripen, is another important element of the Cuban cuisine. When it is cooked green it is cut into slices and fried. They are called mariquitas or chicharritas. There is another way of cooking green bananas, which is cut into gross slices and fried, then punched with the hand and refried. They are called tostones, chatinos or tachinos, depending of the region of the country. The ripe bananas can be fried and they become a sweet and delicate flavor.

With bananas, it is possible to prepare many plates. Another one is the fufú, which are green bananas parboiled and transformed into a puree, seasoned with garlic and any other spices, and blended with pork cracklings. This was a plate invented by the black slaves, but it broke the chains and was incorporated into the Cuban menu.

The Cuban cuisine had the same genesis of that culture: it has been integrated by contributions of Spain and other regions. The poor table was conformed, partly, by the Canaries. They left the chickpeas that the islanders ate with corn, and Mojo, a very important dressing for most of the Cuban plates where the viands are included.

From Africa came the forced habit of the slaves of eating corn flour, tender or dry, and in tamales. Even the Chinese brought, more than 150 years ago, their culinary ideas. That is why we also have the fried rice, plate combined with multiple meats and vegetables.

In favor of the Cuban culinary art is necessary to admit the creativity of the cookers. A traveler of the XIX century, the North American Luisa Mathilde Woodruff, wrote that she saw in Cuba already known plates, and she found out, when she tasted them, that those plates were different in a way. Due to that capacity, the Cuban cuisine stands out in the revenues that the country receives from tourism.

A spirit of renovation and variety is perceived in the Cuban recipes. The ability to combine traditional plates with new tastes has propitiated the invention of new plates.

Cubaluxuryhotels wants to offer you information about the most popular restaurants in Havana City:

Check out restaurants that we recommend if you choose our Cuba Travel Services:

-El Templete: Located in the Old Havana, near the Havana Port. This restaurant is specialized in see food and International dishes. The food is just excellent, maybe the best around.  Address: Ave. del Puerto esq. Narciso López, Habana Vieja

– Paladar La Guarida:  La Guarida is a famous paladar, closed during a period for restoration and now reopened. This place was the scenery of the remarkable Cuban film Fresa y Chocolate.¨ Located in Centro Habana neighborhood  La Guarida offer not just an excellent food, also the experience of its location in a solar Habanero. Some of its dishes are elaborate with Cuban fruits, of delicious taste.
Address: Concordia No.418 /Gervasio y Escobar. Centro Habana.

La Bodeguita del Medio: For 58 years, La Bodeguita del Medio -founded in 1941 by Angel Martínez- has been the best creole restaurant, a meeting place and inventory of the famous and people in general. It´s a genuine exponent of the Cuban culture. Many personalities have visited it: Hemingway made the Mojito famous, the traditional cocktail of the house; Nicolás Guillén, the roast pork leg; Presidents of States, Nobel Prizes, writers, poets, painters and artists, in general, have left their memories on the walls covered by autographs and photos that revive our history.
Address: Empedrado No. 207, La Habana Vieja. Tel: 78671374

The house restaurant, La Paella, has a specialty of Valencian paella which won the International Paella Prize in Valencia. Their young Cuban chef has also triumphed in other contests and is a rather proficient cook. The 68-capacity restaurant is decorated in a traditional Spanish theme, complete with bullfight photos, paintings from that country, historical images and more.  Address: Hostal Valencia. Calle Oficios No. 53, Old Habana.  Open 12 noon – 12 midnight.

El Aljibe: Very agreeable and popular spot for Cuban food prepared as if it were straight from mom’s pot. They have an all-you-can-eat roast chicken special with black beans and rice for $12 USD, drinks not included.  Address: 7th Street between 24th and 26th, Miramar.  Open 12 noon – 12 midnight.