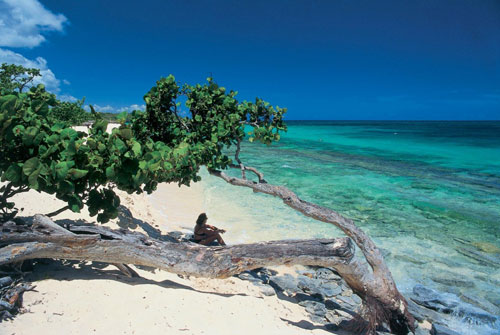 Varadero offers the most all-inclusive, full-service beach and water sports vacation on the island. From Havana the resort is 140 kilometers (87 miles) along the Via Blanca which borders the northern coastline of the province of Matanzas as well as crossing through the city of the same name.

The history books say that the first inhabitants in this region came here because of the enchanting turquoise waters. They left behind pictorial symbols and traces of their religious beliefs that scientists have been unable to decipher to this day. In the second half of the 13th century, some people bought property along the peninsula – among them large farm estates. One of these estates was called Varadero which gave its name to what has become today the tourist capital of Cuba.

The Playa Azul (Blue Beach) as some call it, is more than 20 kilometers (12.4 miles) long. It offers activities such as biking, water-skiing, tours by yacht and helicopter, surfing, kayaking, catamaran and golf. Varadero’s exquisite food, night life, fresh and healthy air, and most of all its clean and transparent waters make it very popular for Europeans. There are more than ten virgin islets in the area along shores that are an ideal refuge for the spiny lobster (Palinurus vulgaris), marine shrimp (crangon septenteninosa), crab (supo. brachura), caguamas (caretta caretta) and 70 kinds of moluoscos such as the cobo (strombus gogas).

This beautiful beach gives you some wonderful hotels in which to luxuriate,  23 diving zones, and a gorgeous natural environment which is famed throughout the world.

The Eastern Beaches begin with Playa Bacuranao, 18 kilometers (11.2 miles) from Havana, and extend to the beaches of Tarara, El Mégano, Santa María del Mar and Boca Ciega, up to the little town of Guanabo 27 kilometers (1.8 miles) from the capital. All these beaches are included in what is called the “Circuito Azul” (“Blue Circuit”) for the color of their waters and of the sky. Hotels have been built along the long sandy shore of the eastern beaches which are much frequented by Cubans seeking a day or weekend repose from Havana. Santa María del Mar is the biggest of the beaches, seven kilometers (4.3 miles) long. Beneath the waters of this beach can be found many different kinds of coral and other marines species.

Playa Tarará is twenty-two kilometers (13.7 miles) to the west of Havana (a twenty-minute drive from the capital). Like the other beaches of the east of Havana, Tarará posses warm waters for bathing and fine, soft sand for taking in the sun afterwards. This place is known for its coralline formations and the abundance of chernas (Epinephelus spp.) and snapper (Lutianus spp.) that swim in the mouth of the Tarará River.

Just 45 minutes to the east of Havana along the Via Blanca Road, shortly after the fishing town of Santa Cruz del Norte, can be found Playa Jibacoa nestled between two hills. In fact, it looks as if the natural environment of the place was designed for those seeking a little shrine to the sun and tropical clime. The palms and the coconut trees add to the beauty of the beach with its calm, warm waters of blue-green color. A typical Caribbean beach with excellent conditions for water-skiing, scuba diving and windsurfing. This is also a perfect spot for a ride on a catamaran, aquatic biking, sailing, kayaking, and sport fishing. The waters have a high visibility ratio of more than 70%, making it possible to see the seabed (covered with a carpet of small shells) from the surface. At night there are activities such as games, dancing, races etc. organized by the hotels along the beach. Just contact our agency Cubaluxuryhotels.com and we will arrange your Cuba Travel Services.

Cayo Largo del Sur is the second biggest key of the Canarreos Archipelago. It is located between the Gulf of Batabanó and the Caribbean Sea, 114 kilometers (71 miles) to the east of the Isle of Youth, 80 kilometers (50 miles) to the south of the Zapata Peninsula. This lovely place boasts 26 kilometers (16.2 miles) of white sands, crystal clear waters and unexplored depths. Its beautiful beaches include Playa Blanca, Playa Lindamar, Playa Sirena, Playa Luna, Playa Tortuga and Playa Los Cocos. The most beautiful is Playa Sirena. Cayo Largo del Sur offers an ideal environment to see great pelagic (?) species. The area is under very strict ecological protection to safeguard it’s reefs and sea life.

From Cayo Largo it is possible to visit the nearby keys of Cayo Rico, Cayo Iguana, Cayo Pájaros, Cayo Cantiles and Cayo Rosario. Access to Cayo Largo is via yacht or private plane without a visa, or by flights into Varadero from Havana and beyond.

This beach of eight kilometers (five miles) of fine, white sands, is located in the Bahia de Corrientes (Bay of Currents), in a zone very close to the point where the Caribbean Sea meets the Gulf of Mexico. It is 300 kilometers (180 miles) from the Jose Martí International Airport of Havana via ground transfer, and 150 kilometers (93 miles) to the southwest of the city of Pinar del Río, along with the southern coast of the province. It is part of the Guanacabibes Peninsula National Park, a biosphere reserve.

Its name finds its origins in a story about a very portly and well-endowed Venezuelan woman named María, who was captured by pirates who brought her to the Bahia de Corrientes. In one of their many forays in the Caribbean, the pirates did not return and María had to survive to sell drinking water along with her own body. It was said she had a big house made of guano on the beach which is today known as the Casa de las Tetas de María la Gorda (House of Fat María’s Breasts) in homage to the prominence of her chest and to the place where she took her ritual baths. María died here, very old and bigger than ever but nobody knows where she was buried.

The beach has calm waters because of the protection offered by the peninsula against the currents of the Caribbean Sea. The translucent waters attract scuba divers year-round. In María la Gorda, the golden sand, the warm mornings and the whisper of the breeze from the sea invite rest, relaxation and a freeing of the spirit. Vegetation is primarily made up of palm trees that sway gently and sleepily above you.

Villa María la Gorda hotel is all that you would expect: hospitable, comfortable, with privacy, in perfect harmony with the surrounding natural beauty of the area. Como to our beautiful island and contact our Cuba Travel Services.

This key is close to Cayo Paradiso in the Archipelago de los Colorados, 1.2 kilometers (0.75 miles) to the north of Pinar del Río province. It is located 132 kilometers (82 miles) from the José Martí International Airport in Havana – two hours via ground transfer.

The beach extends for 3.5 kilometers (2.2 miles), and is characterized by the existence of an extensive coral reef, with many different kinds of corals such as sweetheart’s bouquet, deer’s horn (Acropora spp.), big-eared coral, white corals and the famous black coral. The coastal zone is covered with mangroves where many tropical birds live. Some of the species that can be found in the clear waters here are the red snapper (Litjanus aya), lobsters (Palinurus vulgaris) and the nail fish (Makaira spp.,Tetrapturus spp.).

Along the beach can be found the comfortable Villa Levisa just a 15-minute boat ride from Palma Rubia in the northwest of Cuba. This area is very popular with divers and amateurs of other nautical activities such as water skiing, windsurfing, sea-kayaking and catamaran sailing. We can arrange your reservation at this gorgeous destination. Request our Cuba Travel Services.